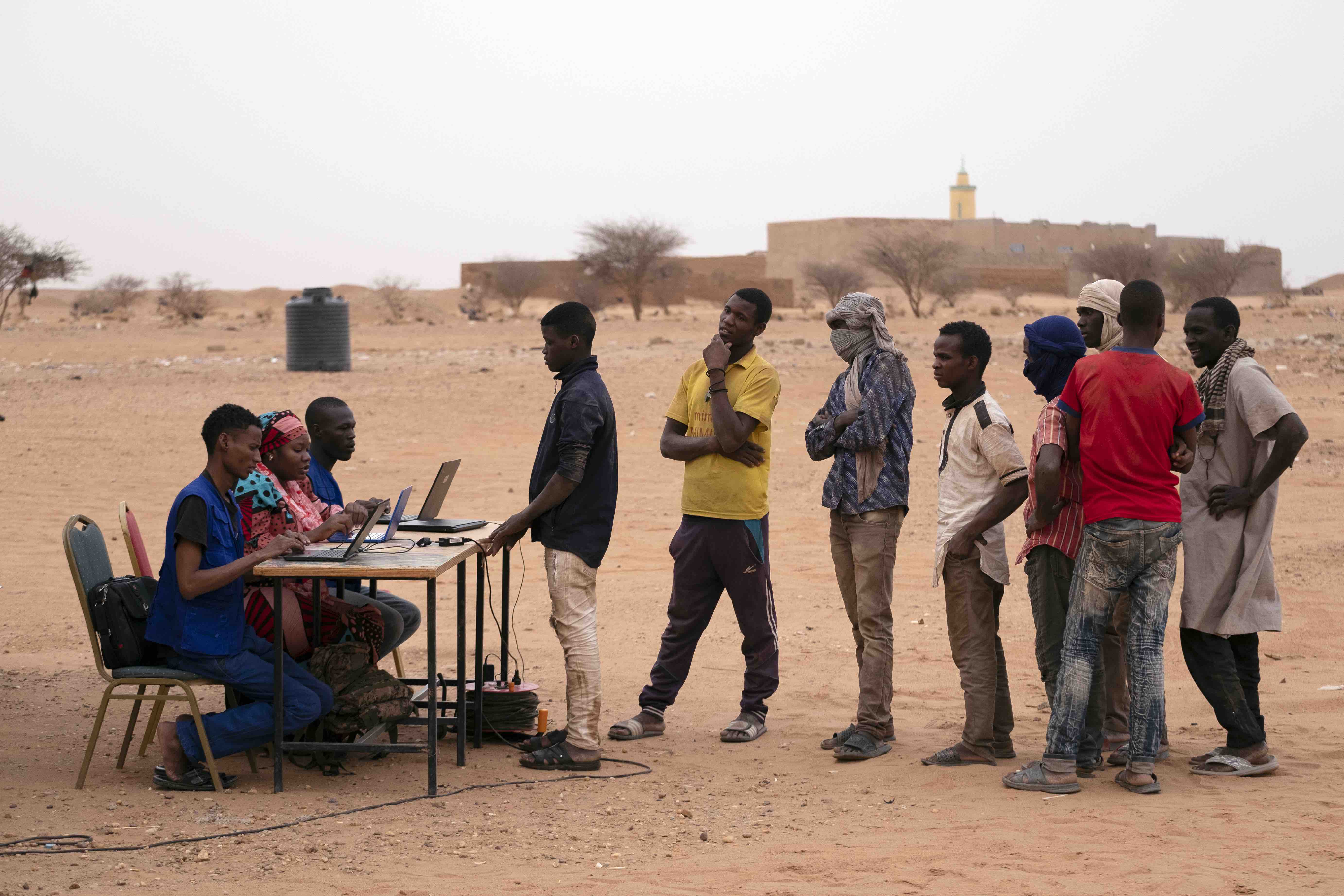 The wars on terror and migration have seen international funders sponsoring numerous border control missions across the Sahel region of Africa. Many of these rely on funds supposed to be reserved for development aid and lack vital transparency safeguards. After looking at Europes's shady funds to border forces in the Sahel area, freelance journalist Giacomo Zandonini looks at how Niger has recently joined other countries in creating a biometric database that will be used in the upcoming elections.

Sitting on the ground inside an unadorned courtyard in Koira Tegui, one of Niamey’s most popular districts, Halimatou Hamadou shows a copy of what, she’s been told, is a certificate of birth.

The 33 year old woman, who’s unable to read and write, received it days earlier during a crowded public ceremony at a nearby primary school.

“It’s my first document ever,'' she says, with surprise.

Thanks to the paper, she’ll be able to take part in a crucial passage for the future of Niger: the double-turn electoral round scheduled for late 2020 and early 2021, which will mark the end of President Mahamadou Issoufou’s ten year era, and will be a test for the young Nigerien democracy. It will also be a test of a brand-new biometric voting system, based on personal biometric information.

Niger is the latest of more than 30 nations in Africa that adopted a biometric voting card over the last decade, creating databases with fingerprints and facial images. A decision that might seem at odds with a country where eighty percent of the population has no regular access to electricity, and malnutrition is a recurrent danger for hundreds of thousands of people each year.

Indeed, Hamadou’s concerns seem to be far more immediate, and tangible, than the distant election, whose chip-equipped electoral cards will be produced in France.

“I hope to provide my four kids with enough food and with education, and that we’ll all be in good health,'' says the woman, who settled down in the district as a kid, when her parents migrated from the countryside, and defines the family’s living conditions as “poor and precarious”.

Hamadou’s document is one out of five million, released since mid-2018 as a part of a huge, country-wide exercise to fill gaps in a weak civil register system, where registration rates reach barely 30 percent of the population of Niger.

Leaning against an overcrowded desk in his office on the opposite side of town, lawyer Issaka Souna is the man at the centre of this challenging process. At 64, Souna says he could have “earned five times more per month” had he kept his position as a UN top electoral observer but preferred serving his country in a delicate moment.

When he was nominated at the head of Niger’s Independent Electoral Commission, in late 2017, a new electoral code had just been approved by the Parliament. The use of a biometric identification system was included.

“There was no plan B, we needed to make the new system work,'' says Souna.

“Biometrics, he explains, have been seen as a panacea by a fragmented and distrustful political class, and supported by both the majority coalition and the opposition, afraid of rigged elections.”

According to the fonctionnaire, “biometrics represent an effective tool to avoid that the same person votes twice, a common problem in the region, but they are also expensive and technically complex, in a country with lots of emigrants, nomadic communities and hostile climatic conditions”.

So far, the absence of a reliable civil register has been the main obstacle in building a proper electoral one. Since mid-2018, the electoral commission organises mobile court hearings, known as 'audiences foraines'. These are simplified procedures to release identitity documents in different districts and areas of the country. In this way, millions of Nigeriens, including Halimatou Hamadou, obtained their first identity document ever, a prerequisite to apply for the new voting card.

Starting October 15, Nigeriens wanting to obtain a card need to enter their document, signature, facial image, and fingerprints in a database, at one of hundreds of stations set up by the Electoral Commission in the country’s seven regions. Sixty seven hundred agents have been contracted for the process, and aim to release about eight million voting cards in 2019 to a quickly growing population of 23 million citizens.

Fingerprints won’t be checked at poll stations, but cross-matched by the database’s software to guarantee that nobody is issued more than one card.  Personal information will be stored in the card’s chip and in a centralized database, while “through matching the photo on the card with that in the database, agents at poll stations will have a further option to verify the identity of the voter,'' says Souna.

“We’re influenced by neighbours such as Mali, Chad, Ivory Coast, Senegal, Nigeria, Togo and Benin, that have already adopted biometric solutions for the vote,'' admits Souna, adding that, differently than in Niger, “most of these countries had a working civil register database, that was used as a source for the electoral one”.

Souna seems aware of the huge challenge of bringing one of the youngest and poorest countries in the world to vote, but shows the confidence of a seasoned professional. Money, he says, are his only source of preoccupation.

French company Gemalto was selected as the provider for the biometric system and awarded a 20 million euros contract in early 2019, after a complex selection process, the results of which was questioned by German competitor Dermalog. Still, the sum excludes the salaries of thousands of people employed to make the system work and resist through the long-awaited local elections, a double-turn presidential and legislatives.

The overall cost might bypass 130 million euros, more than five times the cost of the 2016 electoral round, which was based on a traditional register of voters. It’s not a surprise then if, despite the government's announcements that Niger can fund its own elections, its high officials are knocking at donor’s doors.

Yet Niger’s main partners are not rushing up to open.

The UN development programme, a traditional contributor to the electoral process in Niger since the 2011 transition from military rule to an elected government, guaranteed a 2,2 million euros support. Swiss promised about 260,000 million euros.

Big donors as the EU and the US, however, seem to be more cautious. Brussels’ contribution, a bloc’s official told us, “will be relevant, but we’re still fine-tuning it and discussing with Nigerien authorities”.

In principle, over the last decade the EU delegation in Niger had opposed a biometric register of voters, prioritizing civil register reinforcement. But by inserting biometrics into the electoral code, Nigerien authorities “blackmailed their partners: now if we want to support democracy, we need to fund indirectly a biometric system,'' said another official.

Both France and Germany, he added, had lobbied in favour of electoral biometrics. Paris’ interests seem evident. Gemalto’s recent takeover by their state-controlled security giant Thales, approved by the EU Commission in December 2018, contributes to reinforcing one of the biggest players in the global competition over identity technologies.

Niger’s electoral database is just the latest sign of the growing penetration of biometrics in the African continent, in the public administration as well as in banks, the health sector, passports, or humanitarian aid. Its main actors are Western identity giant firms such as Thales, Idemia, Zetes, Accenture, Veridos, that look at Africa as a huge market opportunity.

According to Oumarou Sanda Kadri, one of Niger’s most renowned lawyers, this process doesn’t come without inconveniences. “Our countries are vulnerable and can fall prey to technological illusions,'' he says in his office in Niamey’s east side.

An long-time Vice-President of the National Electoral Commission, Kadri was nominated as the Director of a new national authority for the protection of personal data, in compliance with Niger’s first privacy law, adopted in 2017. He refused the position. Since then, the authority hasn’t been fully installed.

“Niger has now several laws protecting personal data, but so far they’re an empty box, there’s no actual control,'' the lawyer says. When creating the new biometric database of electors, he adds, “we need to ensure that the data collected will be used only for the purpose of election, and not others.''

“The EU has strong guarantees on data protection inside its territory, but when it comes to their partnerships in Africa, is it careful enough?”, wonders Kadri.

Still, more than from concerns over the protection of personal data, the slow pace of partners’ contribution seems to be due to the tense political atmosphere, where divides between the ruling majority and the opposition appear incurable.

Former foreign affairs minister Ibrahim Yacouba, who left the government in 2017 in protest against the new electoral code, told the author that “the next elections will be the first test for democratic alternance since Niger’s independence, but the president’s party is already manipulating them”.

Opposition parties, including Yacouba’s MPN, are boycotting the electoral process, denouncing imbalances in the composition of the electoral commission and in the vote’s monitoring process - and occasionally recurring to street protests.

Biometrics, says Yacouba, can be a tool against fraud, but “the transcription of vote remains the most delicate passage, and it will still be done by hand, with no guarantee that opposition watchers can control it”.

These tensions add to the anxieties of Western countries, that look at Niger’s stability as a key factor in guaranteeing their interests in the Sahel, from security to migration control, to vital mineral resources.

“We already have external problems - from war in Libya to terrorist groups entering our territory from Nigeria and Mali - and we can’t afford having internal ones: the next elections need to be peaceful,'' stresses Electoral Commission President, Issaka Souna.

While little debate has accompanied the decision to adopt a biometric register of voters in the country, enrolment operations have already been launched, starting from the northern region of Agadez, where less than a million people are scattered in an immense, hard to reach, barren territory.

“It’s a huge task,'' says Souna, who has overseen some of the most troubled elections in Africa in the last decade, “but I’m sure we’ll make it”.

While Nigeriens race against the clock to make elections happen, will Western partners look at the protection of their personal data, or will they prioritie their geopolitical interests?