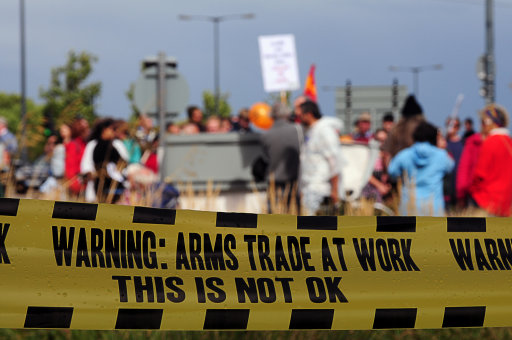 This week in London, the world's largest arms fair DSEI rolled into town, bringing together some of the world’s most sophisticated killing and torture equipment with some of the world’s worst human rights abusers. On sale this year was also some of the UK’s premier lawful interception and surveillance technology.

Considering the forum in which these technologies are being sold, and the caliber of customers looking to buy it, you would think that the sale of such technology from the UK is regulated in a similar way to the military equipment also on offer.

But that isn’t so. The international market in communications surveillance, monitoring and interception technology is dangerously under-regulated. Authoritarian governments that commit human rights abuses regularly get access to gear that enables them to spy on their population’s communications. Yet, shockingly, there is very little at the moment stopping companies on show at DSEI selling surveillance equipment to repressive regimes.

Such controls are already in place to control the trade in military goods in the EU where there is a risk the goods will be used for human rights abuses. While being far from perfect, these controls at least allow for governmental oversight over the arms trade and through this a level of democratic accountability. Given that surveillance technology has the same if not more potential to enable human rights abuses, it is right that the trade is controlled and that the export control system be used as a central element within this.

Recent revelations concerning the UK’s export system have however raised some important questions. The UK has set itself the inherently complex task of being both a human rights advocate on the global stage and its sixth largest arms seller - a fact that has attracted heavy criticism recently. Far from ensuring that military technology doesn’t end up in the hands of tyrants, critics argue that the UK is systematically arming some of the worst human rights abusers in the world.

Back in July, a bi-partisan committee of MPs slammed the UK government for approving over £12 billion worth of UK military and dual-use equipment for export to 27 countries classified as human rights abusers by the UK Foreign and Commonwealth Office. Such countries include Zimbabwe, Israel, Saudi Arabia, Sudan, Syria, Belarus, Yemen and Burma.

The resulting controversy had barely dissipated before UK BIS, the department responsible for export controls, issued a press release announcing that as a result of European action it was to ban the export of military and dual-use equipment to post-coup Egypt – a decision also requiring it to revoke some 49 extant licenses.

Not less than a week had passed however, when it was revealed that the department had in 2012 authorised the transfer of precursor chemicals to Syria that could be used in weapons programs, some 10 months after the civil war began. It was a chilling indictment by itself, but was made significantly more worrying considering that it came only days after the UK parliament narrowly decided against military intervention in ostensible response to the use of chemical weapons. The fact that the Secretary of State responsible for export controls is alleged to have subsequently provided contradictory evidence about the incident did little to help the situation.

The main lesson that is to be learnt from all of this is clear: the UK needs to exercise far wiser and longer-term judgment over its exports of controlled goods.

The debate concerning such transfers is only allowed to happen because the equipment in question was controlled, decisions on approvals were published and because the UK has a robust civil society and media sector able to hold the system to account.

This is not the case with surveillance technology since most of which is not subject to export control in the UK, even though it often goes to repressive regimes. For example, the German-based and British-owned surveillance company Utimaco, were caught providing the snooping technology to Assad’s security services before was broke out, while documents obtained in the midst of the Egyptian Revolution in 2011 show a sales contract for surveillance technology between the security services there and the British spy company Gamma.

Despite these technologies being sold to governments with poor human rights records, no one could be held properly accountable for their export. The only way to do so is to ensure that such equipment is within scope of control.

Cryptographic technology does however fall within export control lists, the trade of which governments are keen to regulate. These controls are essentially designed to guarantee continued government access to worldwide personal communications. They also inadvertently mean that some products, such as Gamma’s FinFisher, which allows users to hack and snoop through computers and mobile phones, require an approval for export. However, this is merely because FinFisher contains cryptography - not because it can be used as a tool for targeting and repression.

The UK, through its trade champion UKTI, has made the export of sophisticated ICT technology requiring cryptography a priority given its undoubted strength in the sector and the current economic climate. Between 2008 and the beginning of this year, the UK approved some £1.18 billion worth of equipment employing cryptographic technology in single licenses to the 27 countries that the UK FCO currently deems as ‘of the most concern’ in terms of human rights. Since 2008 and prior to the Syrian Civil War, over £4 million worth of equipment employing cryptography in single licenses was approved for export to Syria. Over £28 million worth of similarly classified equipment was approved for export to Egypt since 2008, including £387,787 worth since the uprising began in January 2011.

Given the propensity of the UK to approve the sale of controlled equipment to human rights abusers, some serious questions arise out of this. For instance, what was this equipment for, and could these approvals to these sensitive destinations have allowed the transfer of equipment enabling repression? There is an undoubted need for the UK government to go much further in its transparency efforts to allow for its decisions and policies to be held to democratic account.

The banality of export controls

There’s no denying that the UK does take its commitments to human rights seriously, and it does operate one of the most rigorous export control systems in the world. However, it doesn’t mean that the Government won’t arm some of the most rights-abusing regimes in the world in the name of national security, geo-political interests and profit. What’s urgently needed is a reassessment of whether allowing the transfer of strategic goods to rights-abusing destinations demands too much of a sacrifice on human rights and poses too grave a risk to the UK’s own interests, given the repeated tendency such goods have to later be used against the them. While Prime Minister Cameron has made no secret of his desire to promote the UK arms trade across the globe in the past, perhaps recent revelations will now underline the need for such a debate.

At the moment, however, the fact that there are no controls on the export of surveillance technologies in the first place make these arguments moot, despite the fact that these technologies have the ability to empower authoritarian regimes in the same way as the traditional arms trade does. It is only once such controls are in place that any discussion surrounding the UK Government’s foreign policy decisions and priorities can be had.

The UK has avoided unilateral action and said that it will pursue international efforts to bring the market into regulation at a meeting of the intergovernmental Wassenaar Arrangement, a multi-lateral export regime, this December. Despite the fact that this comes too late to have effect on the technology on sale at DSEI this week, this will provide an opportunity for the UK to take the first step. Let’s hope they do just that.