United Nations’ drones: A sign of what’s to come? 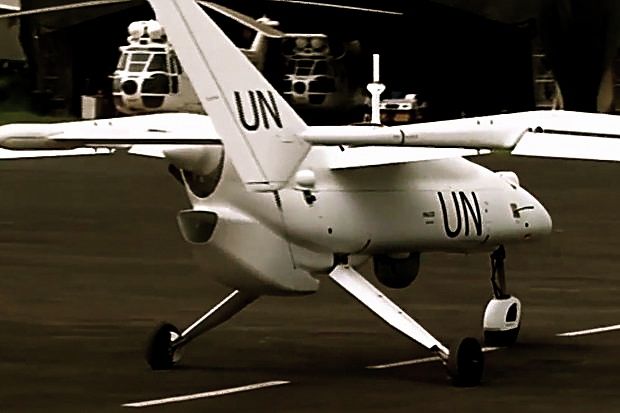 News that the United Nations is using drones (unmanned aerial vehicles) to collect information in the troubled east of the Democratic Republic of Congo (DRC) illustrates the growing use – and acceptance - of surveillance technologies in humanitarian operations.

The deployment of two drones by the UN Stabilisation Mission (MONUSCO) in the DRC last week, to assist the Mission in fulfilling its mandate to protect civilians, had been long foreshadowed, with requests for their use in the eastern DRC dating back to 2008; the UN Security Council effectively authorised MONUSCO to use drones in January 2013 following a 2012 letter from UN Secretary-General Ban Ki-moon commenting on the ability of drones “to enhance situational awareness and permit timely decision-making” in the eastern DRC.

Despite the careful groundwork laid for their deployment and repeated assurances that the drones would not be weaponised, the picture of UN drones flying over conflict zones raises the spectre of the infamous US drone programme and its “targeted” killings. However, a more appropriate, though equally concerning, comparison is with existing initiatives utilising surveillance technologies to assist in humanitarian work. The seemingly benign use of satellite imagery to record massive human rights abuses, for example, is now fairly well established. The privacy implications of using these technologies in humanitarian settings are, however, not well understood.

The humanitarian crisis in the conflict-wracked eastern DRC is severe and MONUSCO’s resources are limited. Over the last year alone, more than 100,000 people have been displaced, “exacerbating an ongoing humanitarian crisis in the region which includes 2.6 million internally displaced persons and 6.4 million in need of food and emergency aid.” One of the key challenges MONUSCO faces is gathering information in the expanse of the eastern DRC to enable it to carry out its mandate of protecting civilians, tracking armed groups and assessing the needs of displaced populations. The information collected by the DRC drones is extensive and, no doubt, very useful to MONUSCO: the UN Under-Secretary for Peacekeeping Operations, in discussing the Eastern DRC deployment, has noted:

One can observe the movements of the armed groups, movements of populations and can even see the arms carried by people on the ground, and it is also possible to see people in forested areas.”

It is clear that collecting information about the complex and constantly evolving situation on the ground is critical to protecting the civilian population and understanding the dynamics of armed groups’ operation. Surveillance drones might well be an appropriate response to this need in the Eastern DRC, but there are many unanswered questions around the information they collect.

For one, who will have access to the information? The drones are reportedly being deployed with consent of the DRC government, and neighbouring countries Rwanda and Uganda have been informed. Could the UN drones – deployed to protect civilians – become the unwitting instruments of government surveillance of vulnerable groups? The drones are also gathering information on environmental damage, but will the information they obtain also be used to identify valuable mineral resources, to further drive conflict?

How will MONUSCO use information it obtains about the movements of armed groups – will publicity cause more unpredictable behaviour or put different populations in harm’s way? How is the information collected stored and kept secure from hackers? Do civilians in the region know the drones are unarmed, or will they fear their presence? These are the types of questions that the UN press releases do not answer, but which are critical to assessing the success - or otherwise - of the drones’ mission.

The UN as an intelligence-gathering agency?

While the prospect of weaponised UN drones remains remote, more worrying – and perhaps less evident –  is the idea that this deployment might augur an era of increasingly intrusive surveillance by UN bodies in the name of humanitarian good. In a June briefing to the UN Security Council, MONUSCO’s Force Commander enthusiastically promoted the use of drones in the eastern DRC and also notably endorsed a more expansive scope for surveillance by the UN, stating,

[There is] the potential to make much greater use of surveillance technology to bolster monitoring capacity, as in the context of cross-border activity. We have borders with many countries and more than 50 armed groups operating close to those borders, which they may cross, leading to broader disturbances. High-resolution imagery could be of significant use as material evidence. In a similar vein, the selective employment of signals intelligence could enable peacekeepers to stay one step ahead of those posing a threat to peace, which would undoubtedly help to mitigate the risks both to the population and to United Nations troops and personnel.”

If drones are the first step in implementing this NSA-lite vision of UN Peacekeeping Operations, their deployment in eastern DRC may represent a deeply concerning development. Nonetheless, it is worth noting that in the same briefing, the Force Commander was careful to note “certain sensitivities and limitations that need to be recognised”:

“The use of surveillance devices could be regarded as overly intrusive by host nations if not adequately controlled, including the information that is generated. … Advanced technology also often requires skilled operators and analysis to support it. Such resources are often in scarce supply, particularly for the United  Nations …”

Drones – the future for the UN?

The drone deployment in eastern DRC is explicitly on a trial basis, but in the June briefing to the Security Council the UN Under-Secretary for Peacekeeping Operations observed that there inevitably would be pressure to deploy them in other peacekeeping operations, stating that “…clearly there is a demand in several other missions and I think there is a need. We shall do that in an appropriate way in the sense that we will first want to learn our lessons and then see how we can best implement it elsewhere.”

This willingness to discuss drones and the role of surveillance technologies in humanitarian settings should be seized now, to prevent the UN itself from facilitating a culture of surveillance that the people of the world – and the UN’s own organs – are rejecting. As Kristin Bergtora Sandvik and Kjersti Lohne of PRIO have noted, drones may “offer humanitarian agencies a range of possibilities in relation to crisis mapping, search and rescue and (some way off in the future) cargo transport and relief drops”. What safeguards must be put in place to ensure that the same technology and its fruits are not used for more malevolent purposes?