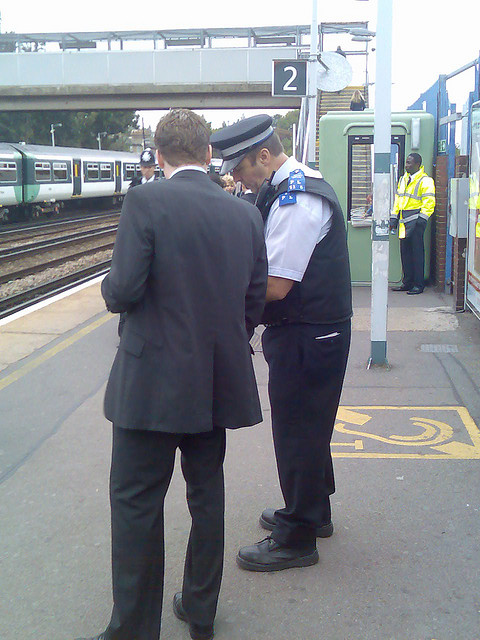 Under the Terrorism Act 2000, police agencies in the UK have the power to stop and search within ‘security zones’ as established under order by the Home Secretary. Since February 2001, London has been designated as a security zone.

When this power was used in 2003 at a London protest against the arms trade, the protestors appealed to the courts on privacy grounds. The UK House of Lords ruled that although a stop and search in public was possibly an interference under Article 8(1) of the ECHR, it was proportionate when seeking to counter the 'great danger of terrorism'1 and in search of items in connection with terrorism. The only safeguard imagined by the Justices was that the officers are 'trained appropriately'.

The ECtHR reiterated that stop and search was an interference with the right to privacy under Article 8 of the ECHR. But it completely disagreed with the UK Government and with the House of Lords judgement.

63. The Government argue that in certain circumstances a particularly intrusive search may amount to an interference with an individual's Article 8 rights, as may a search which involves perusing an address book or diary or correspondence, but that a superficial search which does not involve the discovery of such items does not do so. The Court is unable to accept this view. Irrespective of whether in any particular case correspondence or diaries or other private documents are discovered and read or other intimate items are revealed in the search, the Court considers that the use of the coercive powers conferred by the legislation to require an individual to submit to a detailed search of his person, his clothing and his personal belongings amounts to a clear interference with the right to respect for private life. Although the search is undertaken in a public place, this does not mean that Article 8 is inapplicable. Indeed, in the Court's view, the public nature of the search may, in certain cases, compound the seriousness of the interference because of an element of humiliation and embarrassment. Items such as bags, wallets, notebooks and diaries may, moreover, contain personal information which the owner may feel uncomfortable about having exposed to the view of his companions or the wider public.

The European Court also found that the safeguards that are required in national law are too weak.

80. The Court notes at the outset that the senior police officer referred to in section 44(4) of the Act is empowered to authorise any constable in uniform to stop and search a pedestrian in any area specified by him within his jurisdiction if he “considers it expedient for the prevention of acts of terrorism”. However, “expedient” means no more than “advantageous” or “helpful”. There is no requirement at the authorisation stage that the stop and search power be considered “necessary” and therefore no requirement of any assessment of the proportionality of the measure. The authorisation is subject to confirmation by the Secretary of State within 48 hours. The Secretary of State may not alter the geographical coverage of an authorisation and although he or she can refuse confirmation or substitute an earlier time of expiry, it appears that in practice this has never been done. Although the exercise of the powers of authorisation and confirmation is subject to judicial review, the width of the statutory powers is such that applicants face formidable obstacles in showing that any authorisation and confirmation are ultra vires or an abuse of power.

81. The authorisation must be limited in time to 28 days, but it is renewable. It cannot extend beyond the boundary of the police force area and may be limited geographically within that boundary. However, many police force areas in the United Kingdom cover extensive regions with a concentrated populations. The Metropolitan Police Force Area, where the applicants were stopped and searched, extends to all of Greater London. The failure of the temporal and geographical restrictions provided by Parliament to act as any real check on the issuing of authorisations by the executive are demonstrated by the fact that an authorisation for the Metropolitan Police District has been continuously renewed in a “rolling programme” since the powers were first granted (see paragraph 34 above).

82. An additional safeguard is provided by the Independent Reviewer (see paragraph 37 above). However, his powers are confined to reporting on the general operation of the statutory provisions and he has no right to cancel or alter authorisations, despite the fact that in every report from May 2006 onwards he has expressed the clear view that “section 44 could be used less and I expect it to be used less” (see paragraphs 38-43 above).

83. Of still further concern is the breadth of the discretion conferred on the individual police officer. The officer is obliged, in carrying out the search, to comply with the terms of the Code. However, the Code governs essentially the mode in which the stop and search is carried out, rather than providing any restriction on the officer’s decision to stop and search. That decision is, as the House of Lords made clear, one based exclusively on the “hunch” or “professional intuition” of the officer concerned (see paragraph 23 above). Not only is it unnecessary for him to demonstrate the existence of any reasonable suspicion; he is not required even subjectively to suspect anything about the person stopped and searched. The sole proviso is that the search must be for the purpose of looking for articles which could be used in connection with terrorism, a very wide category which could cover many articles commonly carried by people in the streets. Provided the person concerned is stopped for the purpose of searching for such articles, the police officer does not even have to have grounds for suspecting the presence of such articles. As noted by Lord Brown in the House of Lords, the stop and search power provided for by section 44 “radically … departs from our traditional understanding of the limits of police power” (see paragraph 23 above).

84. In this connection the Court is struck by the statistical and other evidence showing the extent to which resort is had by police officers to the powers of stop and search under section 44 of the Act. The Ministry of Justice recorded a total of 33,177 searches in 2004/5, 44,545 in 2005/6, 37,000 in 2006/7 and 117,278 in 2007/8 (see paragraphs 44-46 above). In his Report into the operation of the Act in 2007, Lord Carlile noted that while arrests for other crimes had followed searches under section 44, none of the many thousands of searches had ever related to a terrorism offence; in his 2008 Report Lord Carlile noted that examples of poor and unnecessary use of section 44 abounded, there being evidence of cases where the person stopped was so obviously far from any known terrorism profile that, realistically, there was not the slightest possibility of him/her being a terrorist, and no other feature to justify the stop.

85. In the Court’s view, there is a clear risk of arbitrariness in the grant of such a broad discretion to the police officer. While the present cases do not concern black applicants or those of Asian origin, the risks of the discriminatory use of the powers against such persons is a very real consideration, as the judgments of Lord Hope, Lord Scott and Lord Brown recognised. The available statistics show that black and Asian persons are disproportionately affected by the powers, although the Independent Reviewer has also noted, in his most recent report, that there has also been a practice of stopping and searching white people purely to produce greater racial balance in the statistics (see paragraphs 43-44 above). There is, furthermore, a risk that such a widely framed power could be misused against demonstrators and protestors in breach of Article 10 and/or 11 of the Convention.

86. The Government argue that safeguards against abuse are provided by the right of an individual to challenge a stop and search by way of judicial review or an action in damages. But the limitations of both actions are clearly demonstrated by the present case. In particular, in the absence of any obligation on the part of the officer to show a reasonable suspicion, it is likely to be difficult if not impossible to prove that the power was improperly exercised.

Interestingly, the Court also mentioned airport security within the opinion.

64. The Court is also unpersuaded by the analogy drawn with the search to which passengers uncomplainingly submit at airports or at the entrance of a public building. It does not need to decide whether the search of the person and of his bags in such circumstances amounts to an interference with an individual's Article 8 rights, albeit one which is clearly justified on security grounds, since for the reasons given by the applicants the situations cannot be compared. An air traveller may be seen as consenting to such a search by choosing to travel. He knows that he and his bags are liable to be searched before boarding the aeroplane and has a freedom of choice, since he can leave personal items behind and walk away without being subjected to a search. The search powers under section 44 are qualitatively different. The individual can be stopped anywhere and at any time, without notice and without any choice as to whether or not to submit to a search.