Who supplies the data, analysis, and tech infrastructure to US immigration authorities?

In the midst of continued widespread public outrage at the US government’s brutal ‘zero-tolerance’ policy around immigration – multiple data and analytics companies have quietly avoided answering questions about their role in feeding the US Immigration and Customs Enforcement (ICE) agency’s data backbone. These companies are bidding to work with an agency that has time and time again shown itself to be a brutal and problematic.

Privacy International has been researching the companies that provide ICE with data, analytics, and tech infrastructure. This piece is about some of companies we’ve found.

Companies that sell ICE access to vast amounts of data collect this data about people from a variety of sources. These sources include electoral registers, the census, local, state, and national online newspapers, sex offense registries, web cookies, email trackers, smartphone apps and third-party trackers, companies you interact with online and offline, social media sites, online quizzes, surveys, prizes, financial companies, other data companies, and many other sources. Analytics companies market their ability to make sense of large data sets and to “see the people behind the data”.

The data and analysis systems sold to ICE can be used by the agency and others to identify and track people and their families, including for deportation.

ICE bought access to this license plate data from West Publishing (which is a subsidiary of Thomson Reuters) as part of a contract value worth over $6 million in December 2017. West Publishing obtained the license plate data by working in collaboration with a company called Vigilant Solutions. Vigilant Solutions gathers data from “commercial applications such as access control, tolling, asset recovery and more”.

Companies such as West Publishing make millions selling access to this data. And for years US government agencies such as ICE have been using taxpayer money to buy access to this invasive and sweeping data about people.

Giant Oak markets itself to government and financial institutions and describes its Giant Oak Search Technology (GOST) as an “open source search and triage tool” that “leverages open sources, social media, and the deep web to identify evidence of illicit activity and relevant information about entities of interest to clients”.

The tool scrapes the web to pull in and search through vast amounts of information available online – such as news stories, blog posts, and images – as well as social media information. Layered on top of the search capability, the tool uses “sophisticated analytics scoring” to prioritise how results are shown, allows customers like ICE to search by key words, and provides a “dossier creation user interface”.

The company appears to have been working with ICE since 2014. In June 2017, the company was awarded a massive contract valued at over $37 million with ICE for open source and social media data analysis. According to an analysis by Privacy International, Giant Oak has made close to $45 million from its work with ICE.

Privacy International has repeatedly raised concerns about how publicly accessible social media data is being exploited by companies and used by law enforcement.

The leadership of Giant Oak have long ties to law enforcement. The CEO of the company was previously Chief of Staff at US Customs and Border Protection.

T-rex is a technology company that has contracts with ICE to ‘modernise’ and provide maintenance to the LeadTrac database, which is owned by ICE’s Homeland Security Investigations (HSI) Counterterrorism and Criminal Exploitation Unit.

The database is used by units within ICE to “vet and manage leads” involving visa and immigration violations. LeadTrac lets agents “query a variety of DHS and non-DHS information systems for information on subjects” and “enter their findings into LeadTrac to build a lead – a unified picture of a subject’s criminal and immigration-related activities”.

LeadTrac also allows agents to search a variety of other DHS databases including the Enforcement Integrated Database and the Automated Biometric Identification System.

The company also bid to assist ICE in the “arrest, detention, and removal of criminal aliens from the United States”, which was awarded to Thomson Reuters Special Services.

In 2017 the company attended an ICE “industry day” for companies interested in building the tech infrastructure and system to facilitate the Trump administrations so-called “Extreme Vetting Initiative”.

The company built and helped to deploy a data analysis platform used by US immigration authorities – called Investigative Case Management System. The platform allows agents to query multiple databases at one time, as opposed to agents being required to perform the same search across dozens or more databases.

The Intercept reported that Palantir also developed a customised version of the company’s Gotham software – which allows agents to access data from multiple US government agencies and organises it using algorithmic processing. It is reported that the customised software, called FALCON, is used by ICE to access personal information such as family relationships and home addresses.

The Intercept reported that according to 2013 funding documents FALCON “will eventually give agents access to more than 4 billion ‘individual data records’”. Further it “gives its users the ability ‘to follow target telephone activity and GPS movement on a map in real time’”.

TRSS is a subsidiary of Thomson Reuters. According to an analysis by Privacy International, the company to-date has raked in over $16 million its work with ICE.

In 2017 TRSS attended an ICE “industry day” for companies interested in building the tech infrastructure and system to facilitate the Trump administrations so-called “Extreme Vetting Initiative”.

In 2018 the company successfully bid to assist ICE in the “arrest, detention, and removal of criminal aliens from the United States”. ICE required technical capability to “track 500,000 identities per month”.

TRSS leadership has long ties to law enforcement. The President of the company was previously the FBI’s Deputy Director and worked for the Bureau since 1988 until 2011.

The CEO of the company was previously the Vice President of ChoicePoint – another data company that maintained more than 17 billion records on individuals and business, and that sold access to the data to 7,000 federal, state, and local law enforcement agencies. ChoicePoint was at the centre of controversy when in 2003 it was revealed the company had received at least $11 million for selling data to the Bush administration, including “Mexico's entire list of voters, including dates of birth and passport numbers, as well as Colombia's citizen identification database”. The company was the subject of a lawsuit after a massive data breach, which was disclosed in 2005. The CEO also is a board member of the ICE foundation.

The company’s General Counsel was previously the Principle Legal Advisor for ICE.

Privacy International wrote to Thomson Reuters asking the company and its subsidiaries, including TRSS, to commit to not further facilitating human rights abuses by selling ICE access to data. TRSS has not made any such commitment, instead saying TRSS “support[s] the rule of law”, and ensures its customers merely have “specific legally permissible uses prior to being granted access to any data”, and that the company is committed to “independence, integrity, and freedom from bias” as “governments and public policy change”.

West Publishing is another subsidiary of Thomson Reuters that has been working with ICE since 2005. The company provides ICE with access to its Consolidated Lead Evaluation and Reporting (CLEAR) system, as part of a contract value worth over $20 million signed in 2017 and a contract worth nearly $27 million signed in 2016. The CLEAR system allows ICE access to a “vast collection of public and proprietary records” including phone records, consumer and credit bureau data, healthcare provider content, utilities data, DMV records, World-Check listing, business data, data from social networks and chatrooms, and “live access to more than 7 billion license plate detections”.

These companies, whose business models depend on accumulating vast amounts of data that doesn’t belong to them and analysing it in ways that people cannot know about or understand, is fundamentally offensive, exploitative, and unfair. At a bare minimum, companies have a responsibility to do due diligence about how their products and services are being used, and to make public commitments to not facilitate human rights abuses.

Companies such as TRSS and West Publishing have not even answered simple questions about how their decision to work with ICE. It’s sad irony that some of the most hard-hitting journalism about ICE’s human rights abuses as of late has come from Reuters journalists, while in the background, the company and its subsidiaries are quietly feeding ICE’s data backbone.

Companies working with ICE to provide data, analytics, and tech infrastructure should be put in the full view of the public. 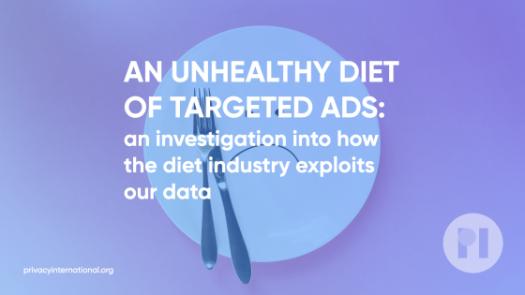 In a landmark decision that shines a light on widespread data protecton failings by the entire data broker industry, the ICO has today taken enforcement action against Experian, based in part on a complaint PI made in 2018.

Choose your own (data) future

This blogpost is a preview of the full 'Our Data Future' story, produced by Valentina Pavel, PI Mozilla-Ford Fellow, 2018-2019. 2030. Four worlds. One choice. Which one is yours? All aboard! Time to step into the imaginarium. Explore four speculative future scenarios, examining how different ways of
Continue reading