US President Trump has been cutting aid to Central America, including a surprise cut of approximately $500m in aid to the “Northern Triangle” countries of El Salvador, Guatemala, and Honduras, apparently as punishment for “doing absolutely nothing” to prevent emigration to the US.

What remains of the funds is largely and deliberately being repurposed for spending on the US’s own security interests: indeed, one area which his attorney general claims will be spared from the cuts to the Northern Triangle is police aid - the provision of financial and technical assistance to law enforcement agencies. Today that also means the provision of surveillance capabilities.

The use of the aid budget to fund foreign police agencies is part of the broader use of military and security assistance provided to countries around the world to further the US’s own security and foreign objectives: in 2001, the US spent $5.7 billion in security aid – in 2017 it spent over $20 billion.

In 2015, military and non-military security assistance amounted to an estimated 35% of entire US foreign aid expenditure: managed by various authorities including the Departments of State and Defense, as well as agencies such as the DHS, DEA, NSA, and FBI, it is being used to train, fund, and equip surveillance agencies around the world.

Not only does this divert aid money away from things like building schools, it spreads invasive and powerful surveillance capabilities around the world. Without the adequate safeguards in legislation and practice, this enforces authoritarianism and human rights abuses – fuelling the very conditions which make people emigrate, while simultaneously cutting the type of aid which gives people opportunities.

Below is an overview of how US foreign assistance to El Salvador, Guatemala, and Honduras is spent on surveillance.

Trump is diverting his Central American aid budget for security purposes: his 2019 budget request would cut aid to the region by $191 million (30%) compared to 2018, while allocating 58% of the total to the Central America Regional Security Initiative (CARSI) – a broad programme which supplies Central American law enforcement agencies with equipment, training, and technical assistance.

Under CARSI, for example, State paid nearly $160,000 in 2018 in aid money to JSI Telecom, a surveillance company specialising in data interception and analysis, for implementation in Guatemala. JSI Telecom, which operates ICE’s wiretapping system in the US, describes itself as a “leading provider of communications intercept collection solution”.

Over $17,000 of aid money was also spent on “surveillance vans maintenance” in El Salvador in 2017 under CARSI. The funds went towards a UK-based CellXion, a surveillance company which sells IMSI Catchers, devices used to indiscriminately identify mobile phones in public areas and intercept calls. The UK government approved the export of an IMSI catcher to El Salvador in 2015, though it is not known if it was for CellXion.

According to aid transparency data, in 2018, the Department of State also made over $300,000 in payments of aid money to surveillance company Pen-Linkfor counter narcotics projects in El Salvador. Pen-Link sells systems which intercept data from telecommunications networks as well as analysis platforms, empowering law enforcement agencies with the ability to trawl through data from phones, social media, email, and other internet communications.

Other government data shows that the Department of State has provided:

Various US security, defense and intelligence agencies train foreign counterparts. In 2015, 94,000 people participated in US-provided police training in more than 100 countries, at a cost of $2 billion.

Trump’s attorney general’s promise that police aid will not be cut to the Northern Triangle was made during the signing of an agreement in May this year establishing “information exchange mechanisms in the fight against human trafficking and other crimes” between US and law enforcement agencies. In February, DHS said such an agreement would include programmes to “Increase the exchange of information related to transnational organized crime”.

One such way this information is exchanged is through ICE’s Transnational Criminal Investigative Units (TCIU), in which ICE works with foreign officers who “identify targets, collect evidence, share intelligence, and facilitate the prosecution of [transnational criminal groups] both in-country and through the U.S. judicial system.” In 2015, DHS spent over $76m in training members of Honduras’s national police at the Federal Law Enforcement Training Center in Georgia to enable TCIU operations.

The agreement also aims to “increase the collection of biometric data of individuals who cross borders in the Northern Triangle countries without valid documents” and “Align technology platforms to meet information sharing and operational needs”.

One such programme is the Biometric Identification Transnational Migration Alert Program (BITMAP). Passed last year despite failing to require adequate privacy protections, it allows Immigration and Customs Enforcement (ICE) agents to provide biometric training and equipment to foreign agencies. The collected data is then shared with US biometric databases, including a new system known as HART developed by arms company Northrop Grumman, which according to a DHS presentation seen by Privacy International will scoop up a whopping 180 million new biometric transactions per year by 2022.

For example, under BITMAP, the State Department in Costa Rica spent nearly $60,000 last year on Jump Kits for capturing and sharing biometric data, according to US procurement records. As of last year, BITMAP was deployed to 14 countries, “with near-term plans to expand to additional countries.”

The export of biometric data collection, processing and sharing by the US is set to increase: under Trump’s December 2018 National Strategy to Combat Terrorist Travel, one of three goals is to “enhance travel security capabilities and capacity of foreign partners” by increasing “efforts by foreign partners to bolster traveler screening, data collection, data analysis, and data sharing, including biometric and other traveler data”.

The agreement also wants to “Expand Joint Security Program (JSP) operations in El Salvador, Guatemala, and Honduras”. Under the JSP program, roving plain clothes US officers are deployed abroad and allowed to identify, question, and review documents belonging to travellers and can recommend they be denied the right to travel.

To find out more some of the sources which can be used to identify surveillance transfers, see Privacy International’s guide to open source research. 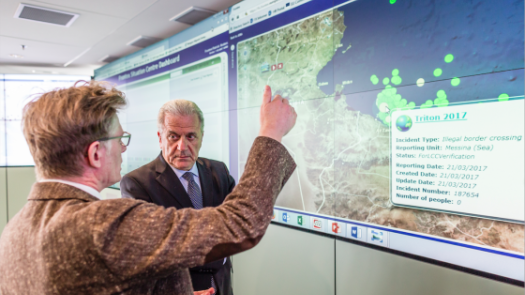