Landmark UK Surveillance Case To Be Heard In Strasbourg Tomorrow 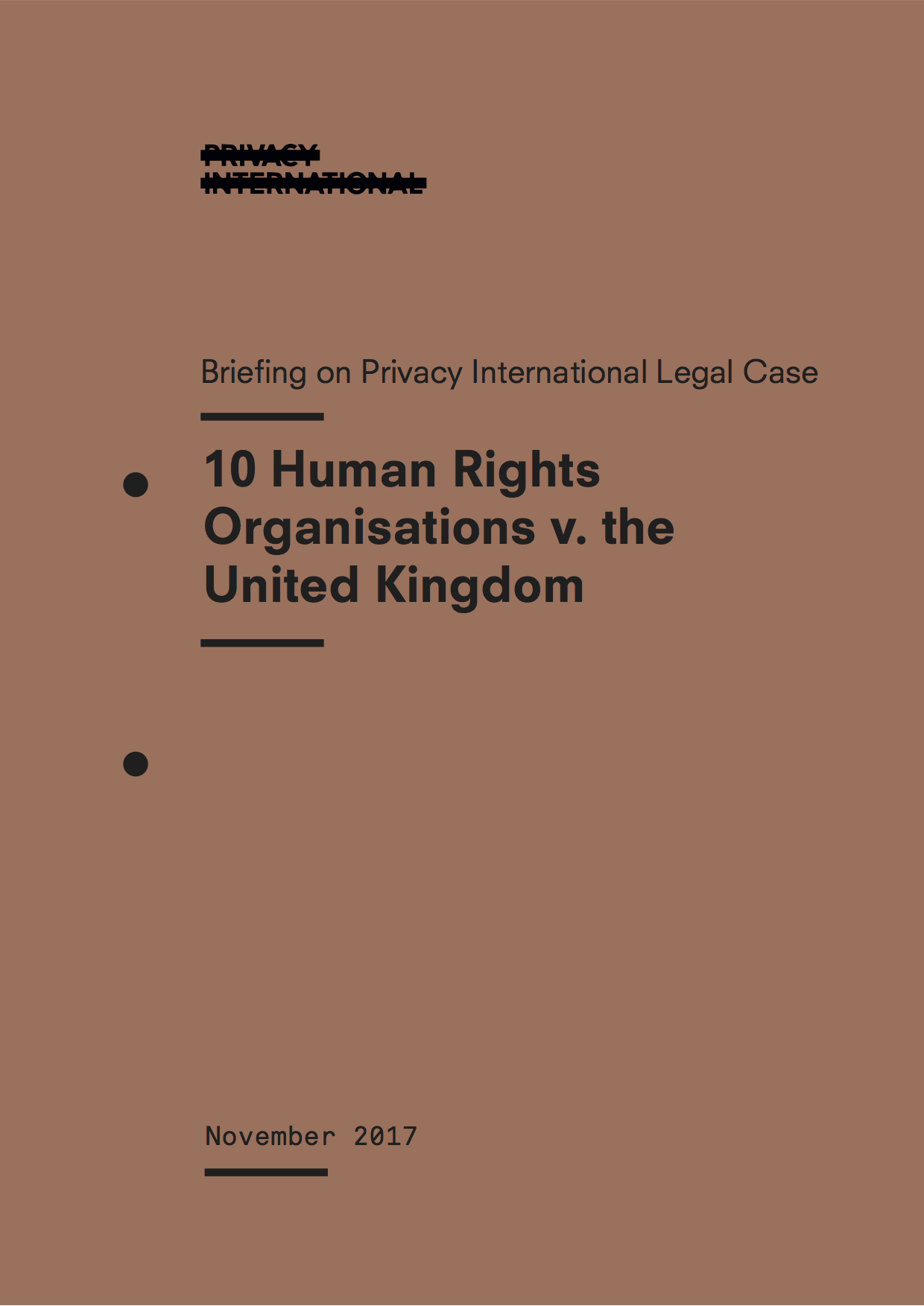 The European Court of Human Rights will hear a landmark case on surveillance tomorrow (7 November) as part of a challenge to the lawfulness of the UK’s surveillance laws and its intelligence agencies’ mass surveillance practices.

See the attached briefing for case background and historical information.

The case, described by campaigners as a “watershed moment for people’s privacy and freedom of expression across the world”, is being brought by Amnesty International, Liberty, Privacy International, the Bureau of Investigative Journalism and ten other human rights groups — as well as two individuals — based in Europe, Africa, Asia and the Americas.

The case is the latest stage in a protracted effort from the organisations to challenge the UK’s extremely wide-ranging surveillance powers following startling revelations by the US whistleblower Edward Snowden.

In 2013, Snowden revealed how the UK’s GCHQ intelligence agency was secretly intercepting and processing millions of private communications of ordinary people on a daily basis (the “Tempora” programme), and — without a clear legal foundation or proper safeguards — sharing data with the USA’s National Security Agency, as well as other countries’ intelligence agencies.

The Strasbourg case is a major test of the lawfulness of the UK’s continued blanket gathering and use of online data. In December 2014, the Investigatory Powers Tribunal — the UK court which has jurisdiction over GCHQ, MI5, and MI6 — ruled that these practices may in principle comply with the UK’s human rights obligations, a finding that is the subject of this challenge. However, in February 2015 the Tribunal ruled the UK Government’s access to US surveillance had been in breach of human rights law prior to the legal proceedings.

Privacy International and the other parties to the case are pointing out that the UK’s surveillance laws and practices affect the privacy and other rights of millions of people around the world, in part because major internet cables run from and to UK territory. There are also major concerns, further highlighted by loose intelligence-sharing frameworks between governments, about the risks to confidential sources often risking their life and liberty to speak out, and the impact on the vital work of human rights groups and journalists. As an illustration of these concerns, this case brings to the European Court’s attention a finding by the Investigatory Powers Tribunal that the communications of Amnesty and the South Africa-based Legal Resources Centre were unlawfully spied upon by UK intelligence agencies.

The case is also expected to have wide-ranging implications for last year’s controversial Investigatory Powers Act, which changed the UK’s legal framework governing surveillance matters, allowing for further blanket surveillance. Amongst other things and in addition to the indiscriminate interception of communications, the act allows the security agencies to hack computers and other electronic devices on a large scale, harvesting potentially huge amounts of personal data from individuals who are not suspected of any criminal behaviour.

“This case concerns the UK, but its significance is global. It’s a watershed moment for people’s privacy and freedom of expression across the world. By bringing together human rights defenders and journalists from four different continents, it also serves to highlight the dangers mass surveillance pose to the vital work of countless organisations and to individuals who expose human rights abuses and defend those at risk.”

“Our organisations exist to stand up for people and challenge abuse of power. We work with whistleblowers, victims, lawyers, journalists and campaigners around the world, so confidentiality and protection of our sources is vital. The UK Government’s vast, cross-border mass surveillance regime — which lets it access millions of people’s communications every day — has made those protections meaningless. Losing our privacy is the gateway to losing everything that keeps us free — the right to protest, to a fair trial, to practise our religion, to think and speak freely. No country that deploys industrial-scale state surveillance has ever remained a rights-respecting democracy. We now look to the Court to uphold our rights where our Government has failed to do so.”

“For years, the UK Government has been intercepting the private communications and data of millions of people around the world. At the same time, it can access similarly enormous troves of information intercepted by the US Government. These practices are unlawful and violate the fundamental rights of individuals across the world, assailing privacy and chilling thought and speech. They are incompatible with open and democratic societies. We call on the European Court of Human Rights to reject them by finding bulk surveillance incompatible with the rights to privacy and freedom of expression enshrined in the European Convention on Human Rights.”

“A free press is vital for democracy, and its operation depends upon journalistic confidentiality and the protection of sources. The interception and mass collection of communications data by the UK Government threatens these basic tenets of journalism and has a chilling effect on whistleblowers seeking to expose wrongdoing. This case at the European Court of Human Rights is a vital step towards the provision of better safeguards that ensure journalists can continue to do their jobs and protect their sources.”